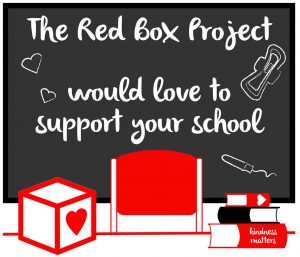 The Red Box Project is a community-based, not-for-profit initiative, which aims to support young people throughout their periods by providing red boxes filled with free period products to local schools.

The Red Box Project was founded in March 2017 by three friends who wanted to give young people in their local area access to sanitary products. After reading about ‘Period Poverty‘ in the news, they were angered at the idea that young women were missing out on their education because they couldn’t afford the products they needed during their period.

They decided to take action and contacted several secondary schools in Portsmouth to ask if a constantly stocked box of menstrual product would be welcomed. The feedback from teachers was that the issue was real and the resource was needed.

Recognising that the need was nationwide, they invited individuals from across the country to be a part of this movement and the response was overwhelming. From Scotland to Cornwall as well as overseas, people began to group together, set up Red Boxes filled with tampons, pads, tights and underwear which were then delivered in to local schools. They fundraised, collected, had craft sales and donations drives, all to make sure their boxes never became empty.

The Knowsley Red Box Project began in September 2018 and not there are boxes in almost every school in Knowsley. This means that every young person in Knowsley will have access to period products in school, meaning they won’t have to miss out on their education because of their periods.

We now have a red stocked box in school. After a meeting with Y5 and Y6 girls, they decied where they would like it to be stored and they can access products whenever they need it. All of the products, and the box, have been donated by our community. There are lcoal donation points in Prescot, Whiston and Huyton,

How Can I Help?

You can buy and donate any of the following items:

You can leave your donations at any of the following drop-off points in and around Prescot:

You can also donate money via the Red Box Project Prescot JustGiving page.